I identify as a Goth mainly because I’ve always liked Halloween and horror films and really it just went from there that I was interested and it was definitely things like Victorian Gothic revival – a lot of the castles and things like that.

Nowadays, obviously, it is a bit different. There is the romantic Goth as a sub-culture whereas I’m just more a traditional Goth and I would say I identify with that.

I think the biggest misconception of what a Goth is, is mainly based on that they’re all dressed in black and there’s quite a big assumption obviously from that that they’re all negative people, maybe depressed, maybe self-harmers and you have to wear black. The most common preconception I think people have is that when they look at me I look quite, I suppose, passive-aggressive. Clearly, I’m nothing like that. People must assume that because you’re Gothic you have to be in a death metal band and you have to scream quite a lot. And I think that’s probably what the most common thing is, people kind of look at you and think you look aggressive, you look threatening. Well, essentially, I’m none of those things and none of the above applies to me but I have to almost fill in someone’s personal checklist of what a Goth is. Because, obviously, all of those are stereotypes that have been around for quite a while and I suppose people think you look quite menacing or intimidating so you’re going to be violent instantly. And, for example, people will see you in the street and they’ll just cross over to the other side of the street, especially when they’re with children. Even if you could say to them, “morning” or be quite friendly to them they’d still ignore you or walk away. A lot of people do think just by looking at you that you look scary or you look dangerous, you’re going to cause a crime – just by how you look.

A lot of times it’s just been when shopping, say to like Boots when buying more make-up and people will just give you a funny look or be specific and tell you, “that’s for women only” or “that’s for men only” and obviously they try and ‘help you out’ by instructing you what they think you should look like and obviously a lot of people pick up on small things like that. And especially because I wear nail varnish and a lot of people don’t quite see what the big draw of it is, whereas I just like to wear it. It’s just what you yourself feel comfortable doing and no one is forcing you to look a certain way because you’re gothic. It’s all about how you really identify with it.

When I was walking down Steep Hill last year, I was wearing the full Goth look really: my boots, my trench coat; everything was on point, so to speak. And I was walking down and somebody randomly made a point of coming out of the pub they were in, just a public garden outside a pub, and just followed after me and started yelling out “Linkin Park” at me. He was generally just yelling abuse at me from behind. I just carried on walking and ignored it. And it’s just stuff like that where they take the time of their day to be negative. It was quite aggressive, you know, rowdy and he was fairly drunk but, at that point, when they realised they weren’t going to get to me, they just ignored it and walked back like nothing had happened. The guy’s friends were just looking at him slightly shocked that he felt like he had to make that point to someone and just yell at them. I suppose it knocked me out of my stride a bit. Coming back, I took a different route, so I avoided that pub completely, even though the chances are he would have gone by that point when I was coming back. I still walk past there today but when I go down there I’ll always make sure to cross on to the other side of the street and ignore that pub and just go past it. It’s definitely when going to pub events that I feel a bit nervous and a bit cautious, I suppose, of the people around you, the patrons there, because you never know when anything like that could happen. Usually, I’m alright going to the cinema because usually the lights go out anyway and there’s not anyone there to focus on how someone looks. How you look and dress sometimes can put people off talking to you. You’re almost fighting a losing battle with some people.

I identify as a Goth mainly because I’ve always liked Halloween and horror films and really it just went from there that I was interested and it was definitely things like Victorian Gothic revival – a lot of the castles and things like that. 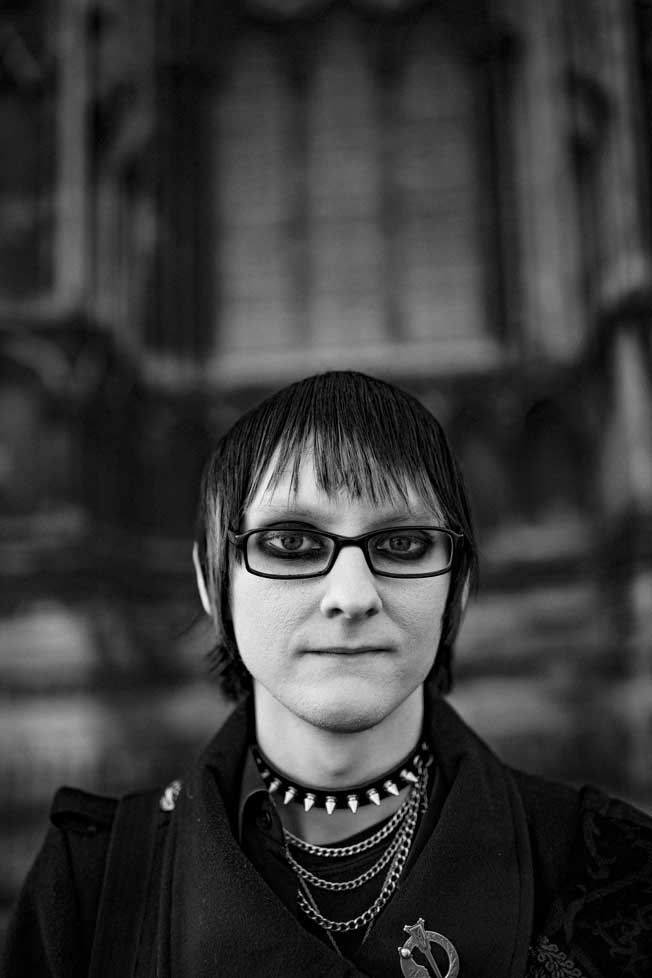